Examining the History of Our Local Newspaper

At the end of every season, we at the South Wood County Historical Museum ponder what are we going to do for next year’s Buehler Gallery exhibit. The 2018 exhibit featured the closing of East Junior High School, also known as the “Old” Lincoln High. While considering what to choose for next season, an anniversary came to our attention:  William F. Huffman purchasing the Grand Rapids Tribune. What about 100 years of Tribune History? 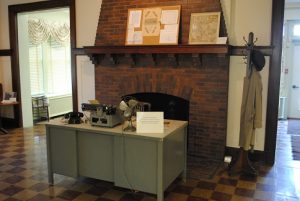 To start preparing for the exhibit, I needed to gain more background on the newspaper history of Central Wisconsin. I was surprised at just how many papers were circulating along our piece of the river. The first was the Wood County Reporter published by John N. Brundage in November 1857 (one year after the county was organized). Another newspaper was the Centralia Enterprise, a weekly paper started in 1879 by C.H. Clark. This paper would go on to merge with the Grand Rapids Tribune, which was created in 1873. The last new newspaper to come into existence was the Wisconsin Valley Leader, which began in 1902.

These newspapers all exchanged ownership multiple times, which came with name changes of the papers themselves. When the Centralia and Grand Rapids papers merged, their name became Centralia Enterprise and Tribune. Then when the two cities of Grand Rapids and Centralia merged and became Grand Rapids in 1900, the paper once again became the Grand Rapids Tribune. It really boggles my mind how much change happened with these papers! What a good way to track the changes going on in the city and county they were named after.

In 1919, the famed and fabled William F. Huffman from Rockford, Ill., moved to Grand Rapids after graduating from Beloit College.

Huffman had already worked in newspapers. In high school, he served as a correspondent and reporter for the Denver Evening Times and Rocky Mountain News. He was the editor of his college newspaper, The Beloit Round Table.

He would leave college for two years which he spent as an ambulance driver for French forces before the United States joined World War I.

Upon graduation from Beloit in 1919, he made the move to Grand Rapids. In October of the same year, he purchased the Grand Rapids Tribune and the Wisconsin Valley Leader. By 1923, Huffman had purchased the Nekoosa Tribune, and discontinued all papers other than the Wisconsin Rapids Daily Tribune, which received its name in 1920, when it became a daily paper.

So, while the exhibit’s focus will be on the years between 1919 and 2019, one can’t help but take note of what happened leading up to the consolidation of the papers. In a time and place where radios weren’t common just yet, newspapers held all the power of the news, not just in the city or county, but state, national and international. As I type this in the digital era, it pains me to think of not being able to plug a question into an internet search engine and have the answer in under one second. What a time to be alive! The excitement of innovation is probably similar to what people in this region felt 100 years ago, when daily newspapers first arrived.