The first photograph shows Stephen (Etienne) D. Brazeau (back row, middle) with his seven sons: Frank S. and George B. in the back row on either side of their father; front row, left to right, William A., Irving N., James E., Stephen D., Jr., and Theodore W. 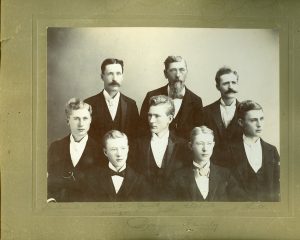 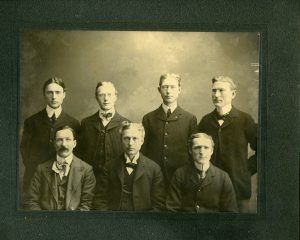 Five of Stephen and Margaret’s children remained in central Wisconsin; four lived in Washington State and one in Utah. Frank was postmaster and a merchant in Port Edwards. Helen (Nellie) Quinn supported her two daughters by keeping boarders, cooking and dressmaking. J. Edward was postmaster and a merchant in Nekoosa. Adelaide (Addie) married John Canning and lived all her life in Wisconsin Rapids. Theodore W. Brazeau lived until 1965, his career including District Attorney of Wood County and a term in the Wisconsin State Senate.

2 Responses to The Brazeau Family